5 things to see in Loro Ciuffenna

In the province of Arezzo, just over 70 kilometers from our holiday villa with pool in Chianti, hides one of the most beautiful villages in Italy. We are talking about Loro Ciuffenna, a small town located between the Arno and the hills that form the prelude to the Pratomagno mountain. The village, characterized by the historic center overlooking a stream, is one of those little-known places that has so much to tell and to offer.

What to see in Loro Ciuffenna? Here are 5 unmissable things! 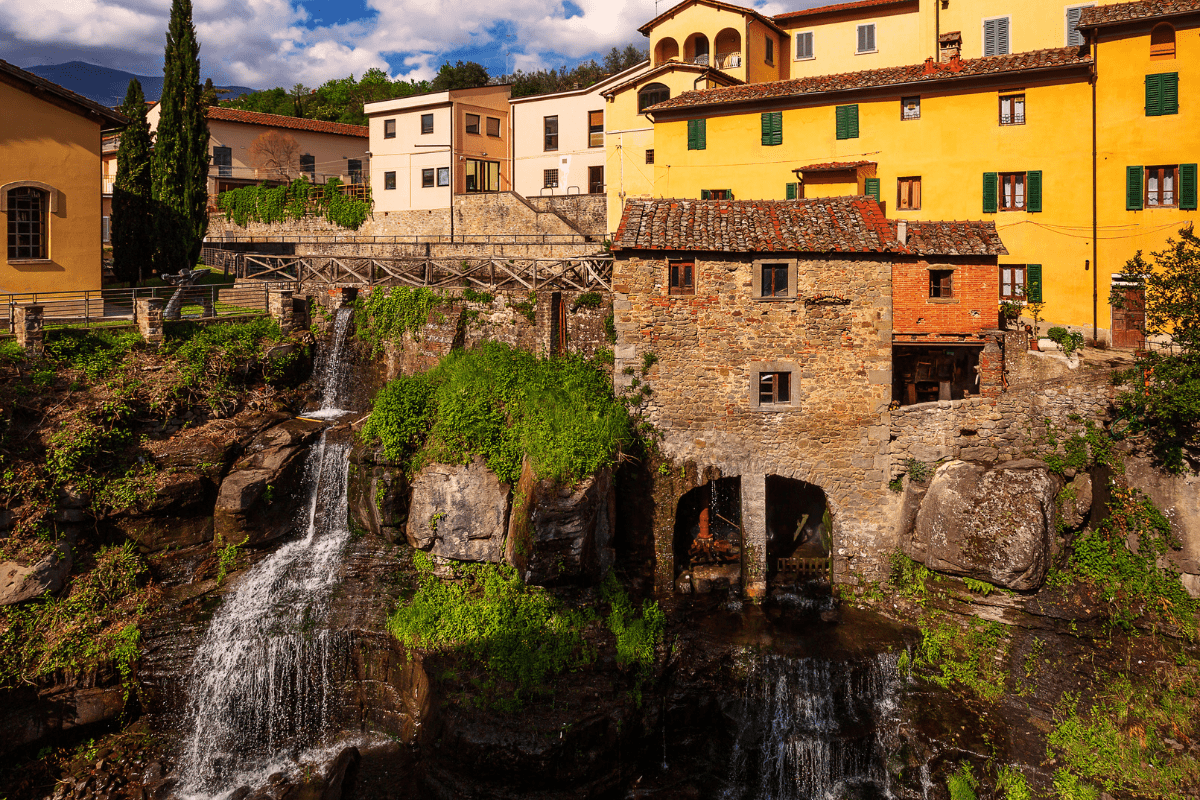 The first thing to see is the water mill, the only one left of the fourteen that were once scattered along the Ciuffenna stream. Built around the year 1000, it is the oldest in the whole region still in operation. The structure, which can be visited today, belongs to the Parigi family and is mainly used to grind chestnut flour, the typical product of the village. It houses three stone millstones that work by means of a vertical shaft on top of which are the blades that allow movement by exploiting the flow of water. Visiting this mill is like stepping into a black and white film.

Just outside the village, and precisely in Gropina, is the Parish church of San Pietro, one of the most beautiful in Tuscany. It is a magnificent Romanesque building which incorporates the ancient early Christian church (5th-6th century) and the Lombard building (8th-9th century). On the outside, it has a simple facade made of sandstone brickwork while the inside houses a splendid pulpit from the 8th century, supported by two knotted columns and enriched with bas-relief figures full of symbols. The capitals are also of considerable value, especially those on the left side. Due to its historical and artistic importance it has been declared a national monument.

The museum dedicated to the sculptor and painter Venturino Venturi, born in Loro Ciuffenna on 6 April 1918, is also absolutely worth a visit. Set up in the halls of the Palazzo Comunale, it houses bronze and wooden sculptures, ceramic objects and drawings by the artist. The exhibition itinerary is divided into seven sections organized according to the main themes of Venturi’s artistic research. The collection of portraits in stone is significant, some of which are of important personalities of 20th-century Italian culture such as Ottone Rosai, Vasco Pratolini, Mario Luzi and Giovanni Michelucci. The museum regularly hosts conferences, concerts and temporary exhibitions.

Another sacred building not to be missed is the Church of Santa Maria Assunta, located in a small square in the upper part of the village. It was once the noble chapel of the Castle of the Guidi Counts. Mentioned as a parish since 1275, during the 14th century it underwent substantial expansion work. Inside there are valuable works of art of various periods and types, among which we point out: a polyptych with a gold background by Lorenzo di Bicci depicting a Madonna and Saints; two panels with the Annunciation and the Pietà by Carlo Portelli; and some frescoes dating back to the 14th and 15th centuries.

#5 – Sanctuary of the Madonna dell’Umiltà

At the edge of the village stands the Sanctuary of the Madonna dell’Umiltà. This beautiful and spacious church was built between the end of the 16th and the beginning of the 17th century to house an image of the Madonna considered miraculous and therefore particularly venerated. Inside there are various works of art, among which the fresco depicting the Madonna and Child with Saints Peter and John the Baptist (15th century), the Nativity of the Virgin by Matteo Rosselli (17th century), and San Carlo Borromeo in adoration of the Crucifix, attributed to Agostino Ciampelli (17th century).