A little more than an hour’s drive from our villa, and precisely in the municipality of Asciano, is the Abbey of Monte Oliveto Maggiore, which deserves to be visited both for the masterpieces it houses and for the position in which it stands. Lying in silent harmony in the breathtaking landscape of the Crete Senesi, it was between the fifteenth and sixteenth centuries one of the main and most influential monastic centers in Italy. Architecturally it is a complex set of buildings built between the fourteenth and eighteenth centuries.

The center of the abbey is given by the large cloister, built between 1426 and 1443, where you can admire a magnificent cycle of frescoes, depicting the life of San Benedetto, started by Luca Signorelli (in 1495) and completed by Antonio Bazzi known as Sodoma (in 1505). The precious works are one of the greatest examples of Italian Renaissance painting. Among the peculiarities of the frescoes we highlight: Sodoma’s self-portrait in the scene “How St. Benedict restores the master that was broken”; and the portrait of Luca Signorelli and two very young Leonardo and Botticcelli in the scene “How Saint Benedict receives the two Roman youths Mauro and Placido”. Sodoma is also responsible for the splendid frescoes on the walls of the passage that connects the cloister with the church. 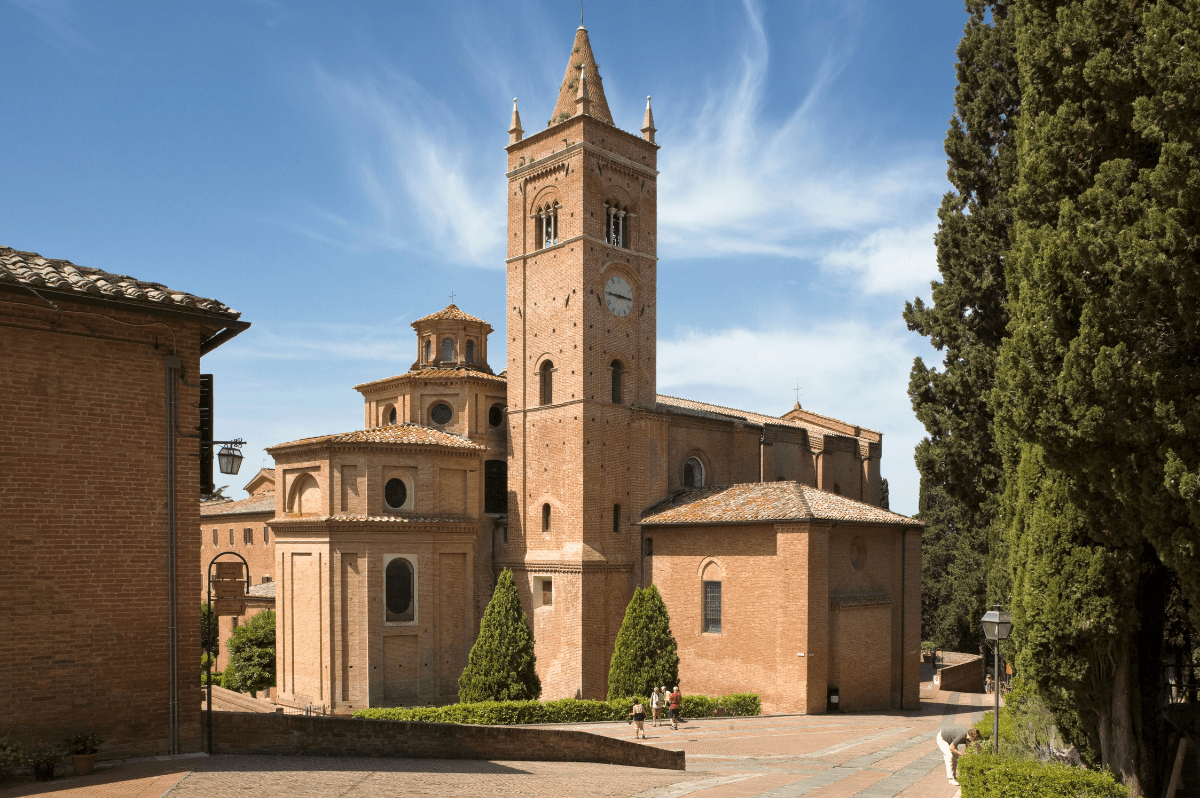 The church, characterized by its imposing dimensions, was built between 1400 and 1417 in the Romanesque-Gothic style but renovated in Baroque style in 1772 by the neoclassical architect Giovanni Antinori. Here, too, various works of art of great value are kept. Among these stand out: the wooden choir carved and inlaid by fra Giovanni da Verona between 1503 and 1505, which represents one of the most important examples of inlay works in the world; the canvas depicting the Nativity of Mary by Jacopo Ligozzi (1598); and the precious lectern of Fra Raffaele da Brescia (1520). In the southern part of the monastery is the refectory, decorated with frescoes representing facts from the Old and New Testament, sibyls and allegorical figures, made by Fra Paolo Novelli in the 17th century. Of considerable value is the canvas by Lino Dinetto depicting the Last Supper (1948) placed on the back wall.

The library was built in the Renaissance style between 1515 and 1516 based on a project by Fra Giovanni da Verona, of whom the candelabrum for the Easter candle and the inlaid cabinet for the choral books (1502) are also preserved. The current book heritage (dating back to the 16th – 18th centuries) comes from the suppressed Monastery of Santa Maria di Monte Morcino Nuovo in Perugia. Contemporary with the library is the pharmacy, where an important collection of 16th century ceramic vases is kept. Instead, in what was once the chapter house a small museum has been set up which collects the artistic testimonies of the monastery and churches under the jurisdiction of the abbot bishop. Among the most important works are: the fourteenth-century wooden crucifix of Montecontieri; the San Bernardino made in the workshop of Francesco di Giorgio; and the two panels with Saint Benedict and an Olivetan Saint, made in the workshop of Bartolomeo di David.