Bagno Vignoni, one of the most famous spa towns in Tuscany

In the heart of the Val d’Orcia lies the charming village of Bagno Vignoni, one of the oldest and most renowned spa resorts in Tuscany. Its beneficial waters, which gush out copiously, were already known in the Etruscan and Roman times, as evidenced by the numerous archaeological finds found in the area. However, the period of greatest prestige of its thermal baths was the Middle Ages. The village, as it is located near the Via Francigena, was frequented by pilgrims traveling to Rome who stopped to enjoy the healing properties of its waters. Over time Bagno Vignoni has attracted a large number of illustrious personalities such as Lorenzo the Magnificent and other members of the Medici family, Caterina Benincasa, who was later a saint, and Enea Silvio Piccolomini, the future Pope Pius II.

The thermal waters flow at a rather high temperature (about 52 °) and are of the bicarbonate-sulphate-alkaline-earthy type. Due to their properties they are particularly suitable for the treatment of dermatological and skeletal pathologies. These are waters of volcanic origin that arise at a depth of 1000 meters, absorbing the precious minerals and sulphurous compounds that characterize it from the soil. 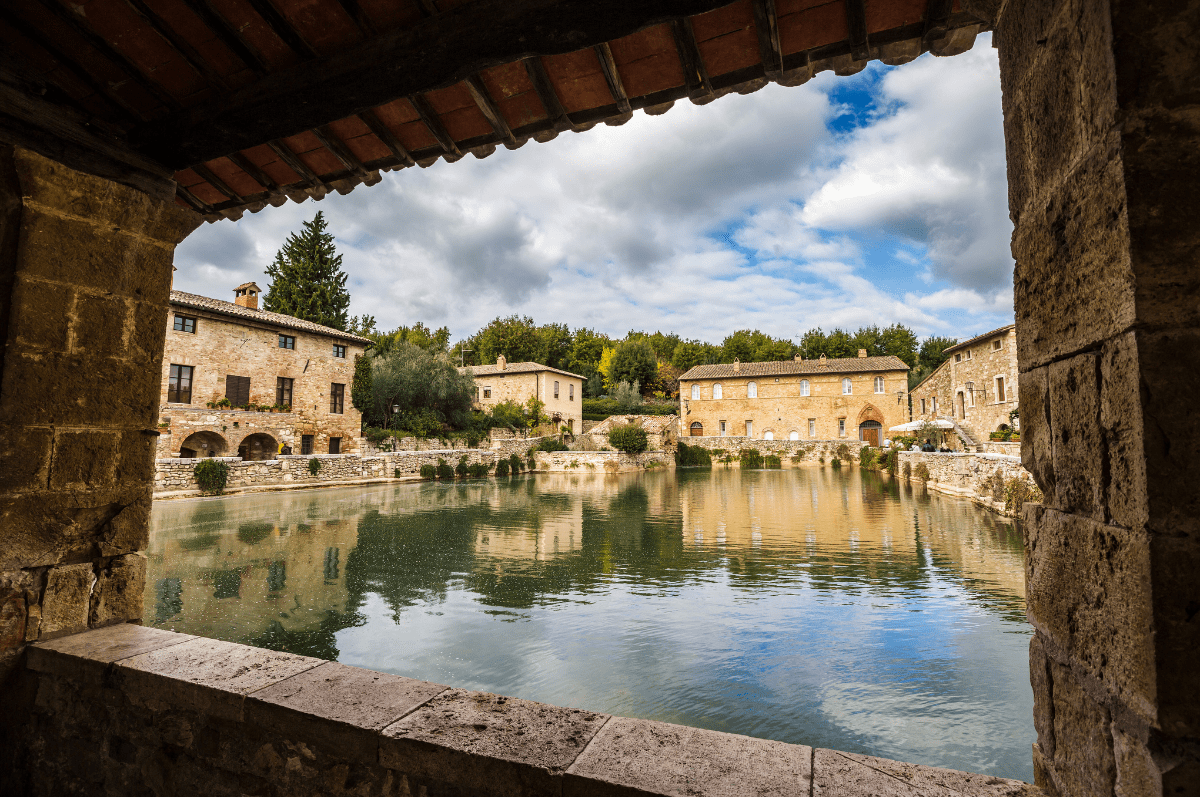 Bagno Vignoni, whose structure has remained almost unchanged, enchants for the frank medieval imprint that distinguishes it. At the center of the village is Piazza delle Sorgenti, made up of an immense basin (49 meters long and 29 meters wide) built in the 16th century, when the entire town was renovated for a defensive function. In the tub the water gushes from the thermal spring and smokes slowly, creating an enchanting atmosphere that has amazed travelers of all times. Today bathing in the tub in the square is obviously forbidden but in the town there are several spas that offer a wide range of treatments, both therapeutic and related to the concept of well-being and relaxation.

From the square the water then flows to the Parco dei Mulini, a protected natural area that can be visited freely characterized by elements of landscape, cultural and naturalistic interest. In particular, you can admire the remains of four medieval mills, dug into the rock, which until the mid-1950s fueled the important milling activity of the village. Among the other interesting places we mention: the ancient Church of San Giovanni Battista, which houses a valuable painting of the Sienese school of the eighteenth century depicting Santa Caterina da Siena; and Palazzo del Rossellino, built in the fifteenth century on a project by the architect Bernardo Gambarelli known as Rossellino.

The village, thanks to its charm and the evocative atmosphere that you breathe there, has often been the protagonist of film successes. In 1982, the famous Russian director Andrej Tarkovskij shot several scenes of the film “Nostalghia” there, which later won the Grand Prix du cinéma de création at the Cannes Film Festival. Among the other films set in Bagno Vignoni stand out: “Al lupo al lupo“, a 1992 film directed and starring Carlo Verdone; and “La scuola più bella del mondo“, a 2014 comedy with Christian De Sica and Rocco Papaleo.