Itinerary from Certaldo to Artimino

What to see around our villa? Follow us on this itinerary from Certaldo to Artimino which touches some of the most pleasant tourist resorts in Tuscany. The route is about 60 kilometers long but can also be covered in stages.

The first stop on the itinerary is San Miniato, an enchanting village just over 30 kilometers from our villa. Very impressive is the historic center, which has preserved its medieval aspect intact. San Miniato is very famous for the collection of the prized white truffle, to which a market exhibition is also dedicated which takes place every year in November. The village is dominated by the Tower of Federico II, dating back to the thirteenth century but rebuilt in 1958 exactly like the original. From the top it is possible to enjoy a wonderful view over the town and the surrounding countryside. San Miniato is rich in religious buildings, among which the following stand out: the beautiful Cathedral of Santa Maria Assunta and San Genesio, with the enigmatic Pisan Romanesque facade covered with bricks; and the Church of San Domenico, of considerable interest from an artistic point of view, which preserves paintings and sculptures of exquisite workmanship. Among the places of greatest interest there are also: the Town Hall, inside which you can admire some richly frescoed rooms; and the Diocesan Museum of Sacred Art, adjacent to the cathedral, which houses an extraordinary collection of works of art from the churches of the diocese. 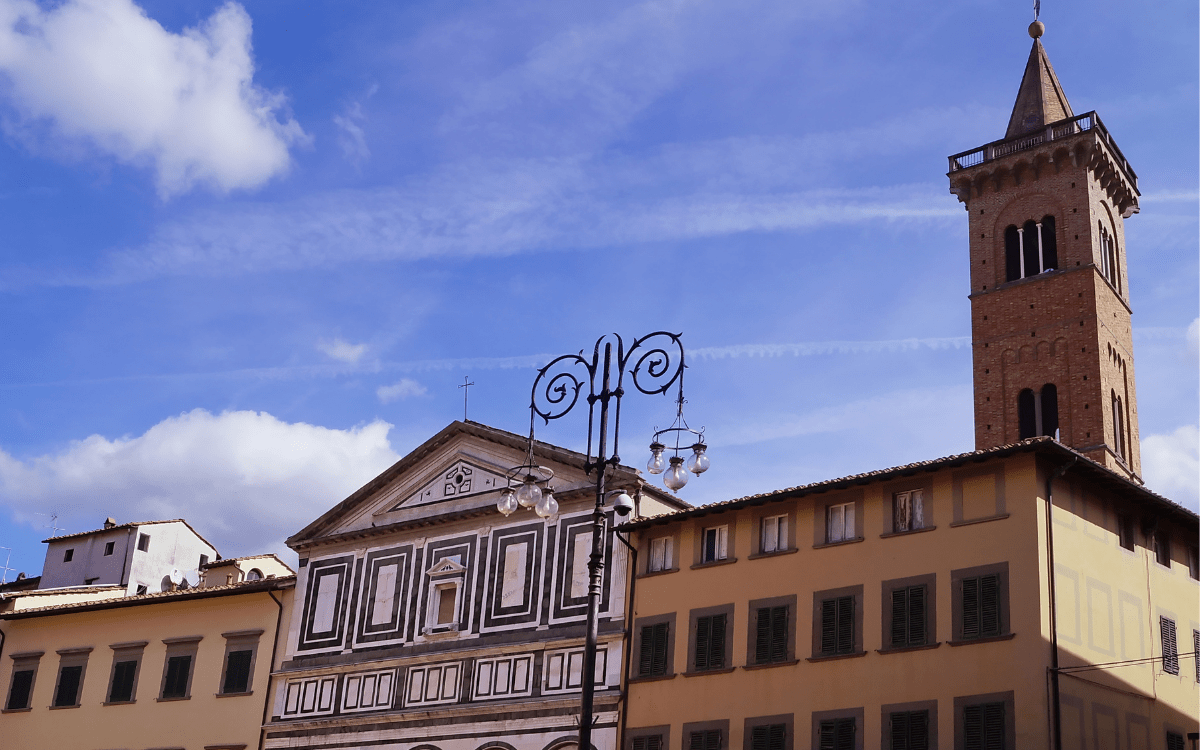 A few kilometers from San Miniato is Empoli, a small and welcoming town that surprises the visitor with some historical-artistic jewels. The symbolic product of Empoli is green glass, to which the MuVE – Museum of glass is dedicated, where the history of this fascinating artisan activity is traced through tools and objects. The historic center is gathered around Piazza Farinata degli Uberti, Piazza dei Leoni for the people of Empoli, overlooked by the Collegiate Church of Sant’Andrea, with its splendid façade decorated in two-tone marble. Attached to the church is the Museo della Collegiata, which houses medieval and Renaissance works of art coming mostly from local churches. Also worth a visit: the historic Palazzo Ghibellino, which houses the Civic Museum of Paleontology; and the Church of Santo Stefano degli Agostiniani, of immense historical and artistic value. In the village of Pontorme, on the outskirts of Empoli, Jacopo Carucci was born in 1494, better known as Pontormo, one of the great geniuses of art history and one of the main exponents of the “modern way”. Here we visit the artist’s birthplace, where objects and works that recall the expression of the master are exhibited.

Finally, the last stop on the itinerary is Artimino, a small medieval village perched on a hill of Montalbano. Original Etruscan center, it preserves interesting remains that can be admired in the “Francesco Nicosia” Archaeological Museum. Set up in the rooms of the former cellars, it houses exceptional funeral objects returned from the necropolis of Prato Rosello and Comeana and testimonies from the Etruscan settlements of Artimino and Pietramarina. The village is dominated by one of the most important Medici villas. We are talking about Villa La Ferdinanda, Unesco World Heritage Site since 2013. Also known as Villa dei Cento Camini for the large number of chimneys that protrude from the top of the building, it was built at the end of the 16th century on a project by Bernardo Buontalenti, one of the greatest architects of the Renaissance. Inside you can admire valuable frescoes made by the masters of the time. Not far from the village stands the ancient Pieve di Santa Maria and San Leonardo, one of the most fascinating examples of Lombard Romanesque architecture in Tuscany.