Itinerary in the Crete Senesi

What to see around our villa? The area that extends south-east of Siena, known as the Crete Senesi, is an unmissable stop for those on holiday in Tuscany. It is one of the most beautiful and fascinating landscapes in Italy. “The vast desert that surrounds Siena from Meriggio“, as Count Pieri wrote in the Agricultural Journal of 1831, is characterized by a continuous succession of biancane and gullies. Along the road that crosses the Crete Senesi you will encounter villages, churches, monasteries, architecture linked to the rural world and extraordinary panoramic points from which to enjoy breathtaking views.

The first stop on the itinerary includes a suggestive observation point on the Crete: the Montaperti hill, which is just over 50 kilometers from our villa. Here the Florentine Guelphs were defeated in battle by the Sienese Ghibellines, who were joined by the exiles from Florence and that Farinata degli Uberti mentioned by Dante in the Divine Comedy. After admiring the magnificent view, continue in the direction of Rapolano Terme, a small village known since ancient times for its beneficial thermal springs. Among the things to see are: the fourteenth-century Porta dei Tintori and the imposing remains of the medieval walls; the Church of San Bartolomeo, with some 14th century frescoes; the Museo dell’Antica Grancia e dell’Olio, which traces the history of the grance; and the Parco dell’Acqua, dotted with travertine sculptures. 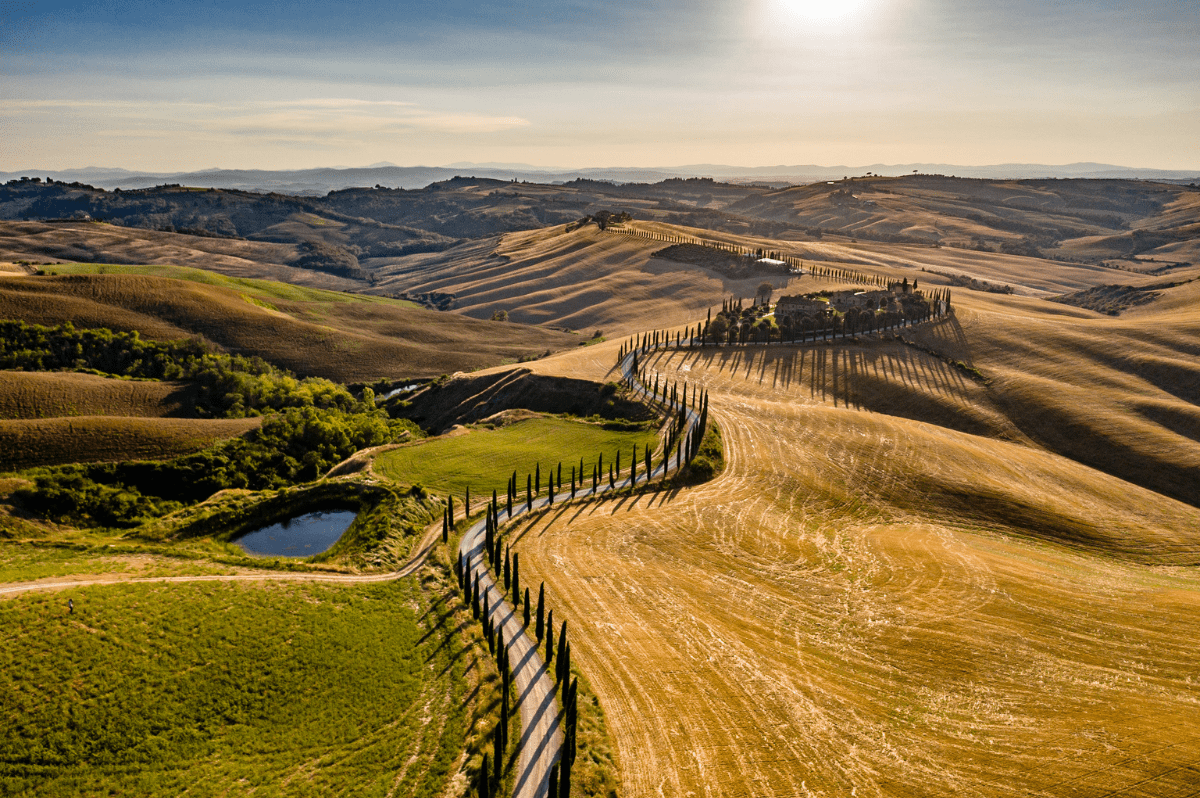 The next stop is Asciano, a typical medieval village of timeless beauty enclosed by well-preserved fourteenth-century walls. The heart of the village is the scenic Piazza del Grano, overlooked by the Palazzo del Podestà, housed in one of the towers of the fortified walls. Among the many places of interest stand out: the Basilica of Sant’Agata, one of the most beautiful and best preserved Romanesque churches in the Sienese territory; the Cassioli Museum, which houses the works of the greatest exponents of Sienese painting of the nineteenth century; and the Civic Archaeological and Sacred Art Museum, with a significant collection of paintings by the Sienese masters, as well as a rich collection of archaeological finds. Near Chiusure there is the splendid Abbey of Monte Oliveto Maggiore, immersed in a dense forest of cypresses, oaks and pines. In the large cloister you can admire the famous cycle of frescoes on the life of San Benedetto, begun by Luca Signorelli and completed by Sodoma.

The itinerary then continues to Buonconvento, an enchanting village with a medieval atmosphere inserted among “The most beautiful villages in Italy”. It houses two museums of considerable interest: the Museum of Sacred Art of Val d’Arbia, where precious works of sacred art from the area are preserved; and the Museo della Mezzadria Senese, which documents the history of sharecropping in the Sienese countryside. In addition to the two museums, the Church of Saints Peter and Paul is also worth a visit, inside which some valuable works of the Sienese school are kept. Finally, the last stop on the itinerary is Monteroni d’Arbia. Here is the monumental Grancia di Cuna, considered the best preserved testimony of a medieval fortified farm. Among the other things to see are: the ancient Church of Saints Giacomo and Cristoforo, with important frescoes from the 14th century; and the Pieve di Corsano, with two beautiful canvases by Alessandro Casolani.