Montefioralle, one of the most beautiful villages in Italy

Between rolling hills and dreamlike views, about 20 kilometers from our holiday villa with swimming pool in Chianti, stands the enchanting fortified village of Montefioralle, a jewel of history and landscape, which has remained intact over the centuries. Located just above Greve in Chianti (of which it is a fraction), it is part of the prestigious club of “I Borghi più Belli d’Italia“. The medieval town is considered one of the most fascinating in the Bel Paese. The village is enclosed in a wall, largely preserved, which culminates with some remains of towers, currently intended for private homes. The narrow and paved alleys, overlooked by picturesque stone houses, wind in an elliptical path that starts from the ancient keep, on the top of the hill.

Today Montefioralle has about one hundred inhabitants but its history is lost in the past. Originally it was called Monteficalle, probably due to the fig trees that grew luxuriantly on the slopes of the hill around the castle. The latter dates back to the first half of the 10th century but is mentioned for the first time in a document dated 1085. It belonged to the Ricasoli, Benci, Gerardini and Buondelmonti families. At the time the importance of the place derived from being along via del Guardingo di Passignano, a road of considerable strategic importance because it connected the main valleys of the Florentine countryside (Val d’Elsa, Val di Pesa and Val di Greve) with the Upper Valdarno. In the 18th century the name of the village was changed to Montefioralle. 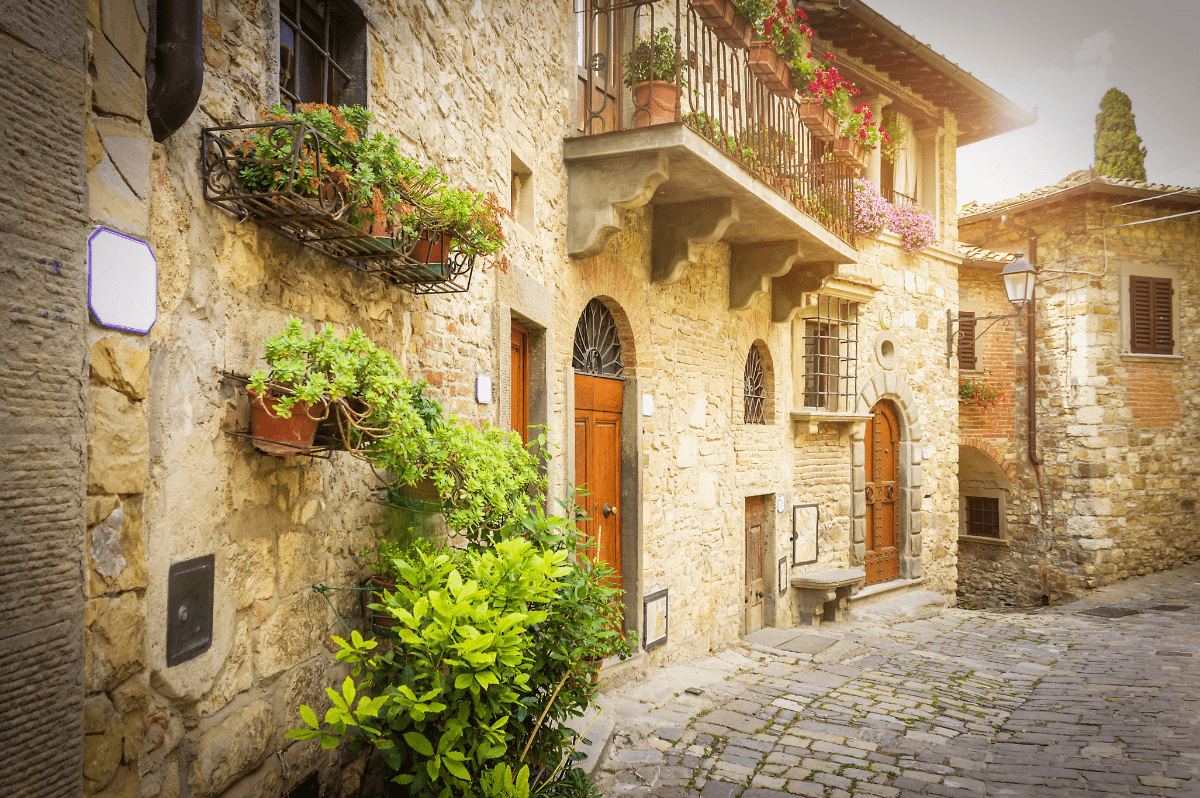 Here it seems to have originated the family of Amerigo Vespucci, the famous navigator who gave his name to America. Among the medieval buildings of the village there is a house on whose entrance door you can see the Vespucci coat of arms. It is traditionally referred to as the home of the last descendant of this important noble family. His grave is located in the small cemetery of the town and is still a pilgrimage destination for many American tourists.

At the center of the village, in the highest part, stands the Church of Santo Stefano, of great artistic and architectural interest. Of original Gothic structure, it is presented in the form assumed between the seventeenth and eighteenth centuries, further modified by nineteenth-century renovations. Inside it houses works of great value, among which the following stand out: a cuspidate table depicting the Madonna and Child by the Master of Montefioralle; a canvas with the Saints Michael the Archangel, Jacopo, Stefano and Domenico, by Orazio Fidani; and a Trinity among four Saints attributed to the Master of the Epiphany of Fiesole. Outside the walls there is the Pieve di San Cresci, named after one of the most important evangelizers of the Florentine countryside. Immersed in the countryside, it should date back to the 10th century, as evidenced by the documents of the time, even if it has undergone several alterations over time. Of the Romanesque structure it retains a small narthex placed in front of the facade.

There are also numerous events that animate the village throughout the year. These include: the Frittelle Festival, held on the weekend closest to the feast of San Giuseppe (19 March); and I Vini del Castello, the review of wines and typical products that takes place every year on the third weekend of May.