One day itinerary in Siena

Located about 50 km from our villa in Chianti, Siena is one of the most beautiful medieval cities in Italy. Its historic center, which has preserved its characteristic Gothic aspect, was included by Unesco in the World Heritage List in 1995 with this motivation: “a masterpiece of inventiveness, where the buildings have been designed to adapt to the urban fabric and form a whole with the surrounding landscape“.

What to see in Siena? Here is an itinerary designed to make you discover the city in one day, spending most of your time walking around its main streets contemplating the beauty of wonderful architecture and historical testimonies.

Ready to get started? Impossible not to start the itinerary from the beautiful Piazza del Campo, the same where the Palio, the most famous historical horse race in Italy, takes place twice a year (on July 2 and August 16). The square, or as the Sienese call it “Il Campo”, has a characteristic “shell” shape, and is divided into nine segments in memory of the Nine Lords who ruled the city from 1287 to 1355. The polychrome stripes of the pavement converge towards the Palazzo Publico, also known as Palazzo Comunale. The building, built between the end of the thirteenth century and the beginning of the fourteenth century, dominates the square with its stone and brick facade and the iconic Torre del Mangia, from which you can enjoy a splendid panoramic view. To get to the top of the tower you have to climb a large number of steps, but it is worth it.

Inside the Palazzo Pubblico there is the Civic Museum, which houses some of the most important masterpieces of Sienese art. Among the most interesting rooms are: the Sala del Mappamondo, also known as the Sala del Consiglio, where you can admire the grandiose fresco of the “Maestà” by Simone Martini, one of the most important works of the fourteenth century in Italy; and the Sala dei Nove, with a magnificent cycle of frescoes by Ambrogio Lorenzetti. Other elegant historic buildings overlook the square such as Palazzo Chigi Zondadari and Palazzo Sansedoni, built according to rules established at the end of the 13th century. At the center of the square is the nineteenth-century copy of the monumental Fonte Gaia. The original work, created by Jacopo della Quercia in the fifteenth century, is kept in the Museum Complex of Santa Maria della Scala. 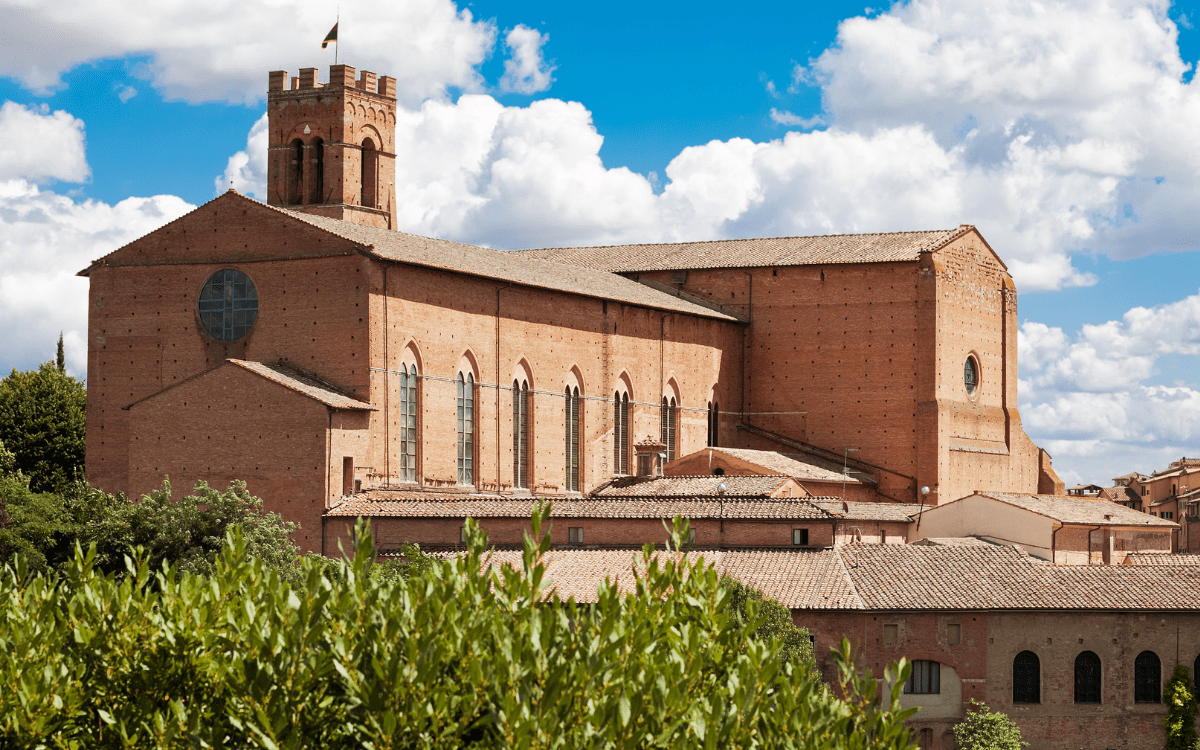 The itinerary continues with a visit to the Basilica Cateriniana di San Domenico, one of the most important religious buildings in Siena. Located between piazzale di San Domenico and via della Sapienza, it represents an extraordinary example of Gothic architecture typical of the Dominican mendicant orders of the 13th-14th century. Inside there are splendid frescoes by Sodoma, among which “Ecstasy” and “Fainting of Santa Caterina” stand out. The ciborium and the two marble angels on the main altar are also valuable. The next stop is the Baptistery of San Giovanni, built in the fourteenth century but with the facade left unfinished in the upper part. The interior, divided into three naves, is enriched by masterpieces by Benvenuto di Giovanni, Pietro degli Orioli and Lorenzo di Pietro. However, the most valuable work is the Baptismal Font, on which artists of the caliber of Lorenzo Ghiberti, Donatello and Jacopo della Quercia worked.

In the immediate vicinity of the baptistery is the Cathedral, dedicated to Santa Maria Assunta, whose bulk rises in the homonymous square. Begun in the 12th century and concluded, in its present form, towards the end of the 14th century, it represents one of the most important examples of Italian Romanesque-Gothic cathedral. The interior is full of masterpieces created over the centuries. You can admire works by Nicola Pisano, Donatello, Michelangelo and Gian Lorenzo Bernini, just to name a few. But what strikes you most as soon as you cross the threshold is the enchanting marble floor with inlaid squares, which Giorgio Vasari defined: “the most beautiful … great and magnificent … that had ever been done”. Also of great beauty is the Piccolomini Library, whose entrance is located in the left aisle, which presents a magnificent cycle of frescoes painted by Pinturicchio and his workshop, between 1503 and 1508, depicting ten episodes from the life of Pius II.

Next to the cathedral is the Museo dell’Opera del Duomo, one of the oldest private museums in Italy. It is located in the right aisle of the New Cathedral, whose construction, begun in 1339, was never completed. The museum collects the treasures coming from the decoration and decoration of the Duomo, as well as reliefs by Jacopo della Quercia and paintings by Duccio di Buoninsegna, Simone Martini, Pietro Lorenzetti and other Tuscan artists. Finally, the last stop on the itinerary is the nearby complex of Santa Maria della Scala, one of the oldest European hospitals, now transformed into an exhibition-museum space. It collects a series of exceptional collections ranging from antiquity to the modern era. Furthermore, there are numerous historical-artistic testimonies, among which the famous male pilgrim, the most important cycle of the Sienese fifteenth century, stands out.