Located in the heart of the Val d’Orcia, Pienza is a splendid village rich in history and art. It represents one of the rare Renaissance “ideal city” projects put into practice. All thanks to Enea Silvio Piccolomini, who, having become Pope Pius II in 1458, wanted to transform his native village, the then Corsignano, into an urban-architectural treasure. He changed its name to Pienza (“city of Pio“) and entrusted the renovation project to the architect Bernardo di Matteo Gambardelli known as Rossellino, a pupil of the famous Leon Battista Alberti, considered the founder of Renaissance architecture. Rossellino in just three years, from 1459 to 1462, carried out most of the work, safeguarding the medieval layout but transforming the town into a miniature Renaissance city.

In 1996 the historic center of Pienza was inscribed on the Unesco World Heritage List with this motivation: “it represents the first application of the humanistic and Renaissance concept of urban design and as such holds a significant position in the evolution of subsequent urban development in Italy and abroad“. The application of this principle has resulted in a masterpiece of the human creative genius.

The heart of the Tuscan town is the magnificent Piazza Pio II, the place that best shows the characteristics of the “ideal city”. All the main monuments overlook it, rich in innovative architectural solutions and works of art. On the larger side stands the Cathedral of Santa Maria Assunta, which was built on the site previously occupied by the Pieve di Santa Maria, of which only a few traces remain. The building, consecrated in 1462, represents a rare and delicate balance of Gothic and Renaissance elements. Inside you can admire several paintings made by the most renowned artists of the time: Giovanni di Paolo, Matteo di Giovanni, the Vecchietta and Sano di Pietro, just to name a few. 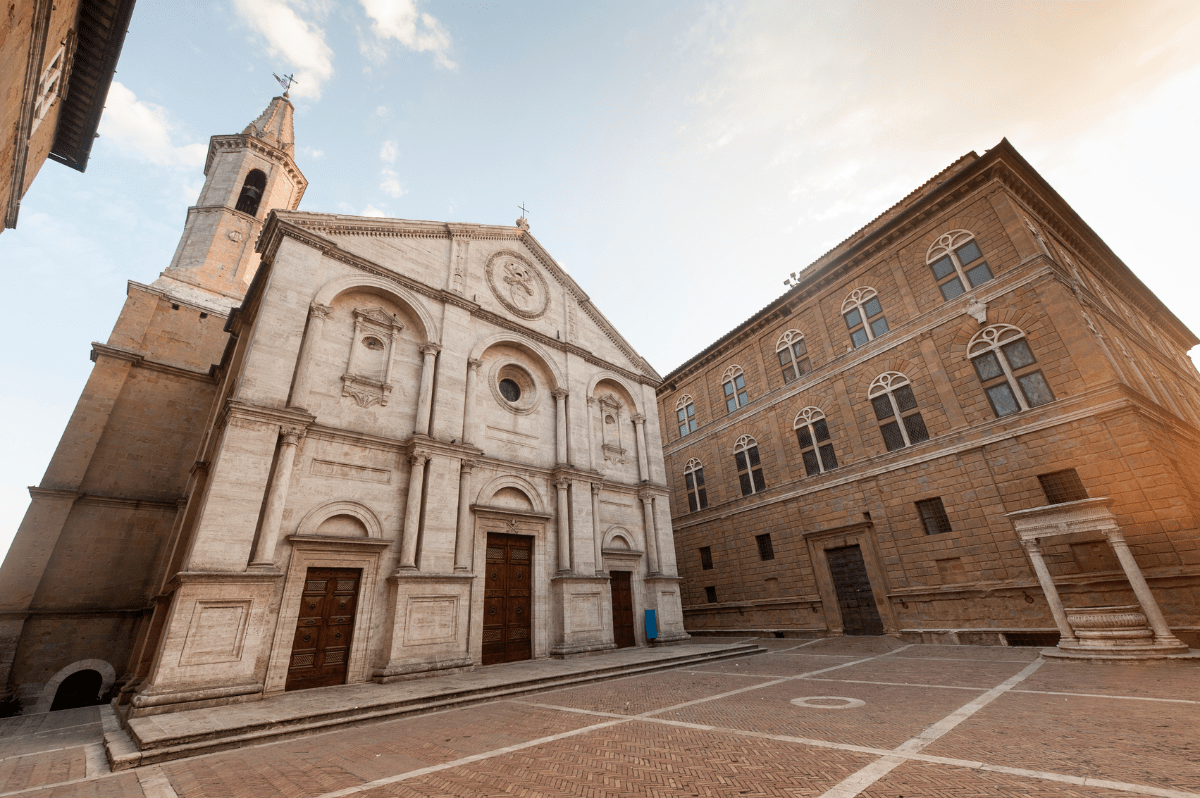 In front of the cathedral is the Palazzo Comunale, characterized by a portico with three arches resting on Ionic columns, while on the right stands the beautiful Palazzo Piccolomini, considered the masterpiece of Rossellino, for whose construction the architect was inspired by the Palazzo Rucellai in Florence. In the imposing palace, which retains numerous period furnishings, you can visit the arms room, the Pope’s bedroom, the library and the medal collection of Pius II and Pius III. The loggia is beautiful, which overlooks a lovely hanging garden, from which it is possible to enjoy an enchanting view of the Val d’Orcia below.

On the left side of the cathedral stands the Bishop’s Palace, also known as Palazzo Borgia, which was donated by Pius II to Rodrigo Borgia, who later became Pope with the name of Alexander VI. The Diocesan Museum is housed in the premises of the building, housing a precious collection of medieval and modern works of art from the cathedral and other churches in the area. Along Corso Rossellino, which is overlooked by numerous shops offering local products, is the small Church of San Francesco, the only building totally referable to the Middle Ages and the ancient village of Corsignano. Among the works present there is a Madonna attributed to Luca Signorelli and paintings by Matteo Balducci and Ugolino Lorenzetti.

Finally, the Pieve dei Santi Vito e Modesto in Rutiliano, also known as Pieve di Corsignano, located a few hundred meters from the center of Pienza, is absolutely worth a visit. An exceptional example of Romanesque art, it features a unique circular bell tower with eight round windows. Among the many and curious symbols that adorn the building, one of the few existing representations of the “ruler snake” can be admired on a column.