Ten things you must see in Chianti

Located between the provinces of Florence, Siena and Arezzo, Chianti is a charming hilly area characterised by a territory rich both from a naturalistic and culinary point of view. Also gathering much interest in the historical and artistic sectors.

This suggestive area, not only famous for its unique hill landscapes and its production of one of the most esteemed wines in the world, is a land rich in history and culture, distinguished by its picturesque villages and historical landmarks, considered some of the most beautiful in Italy. 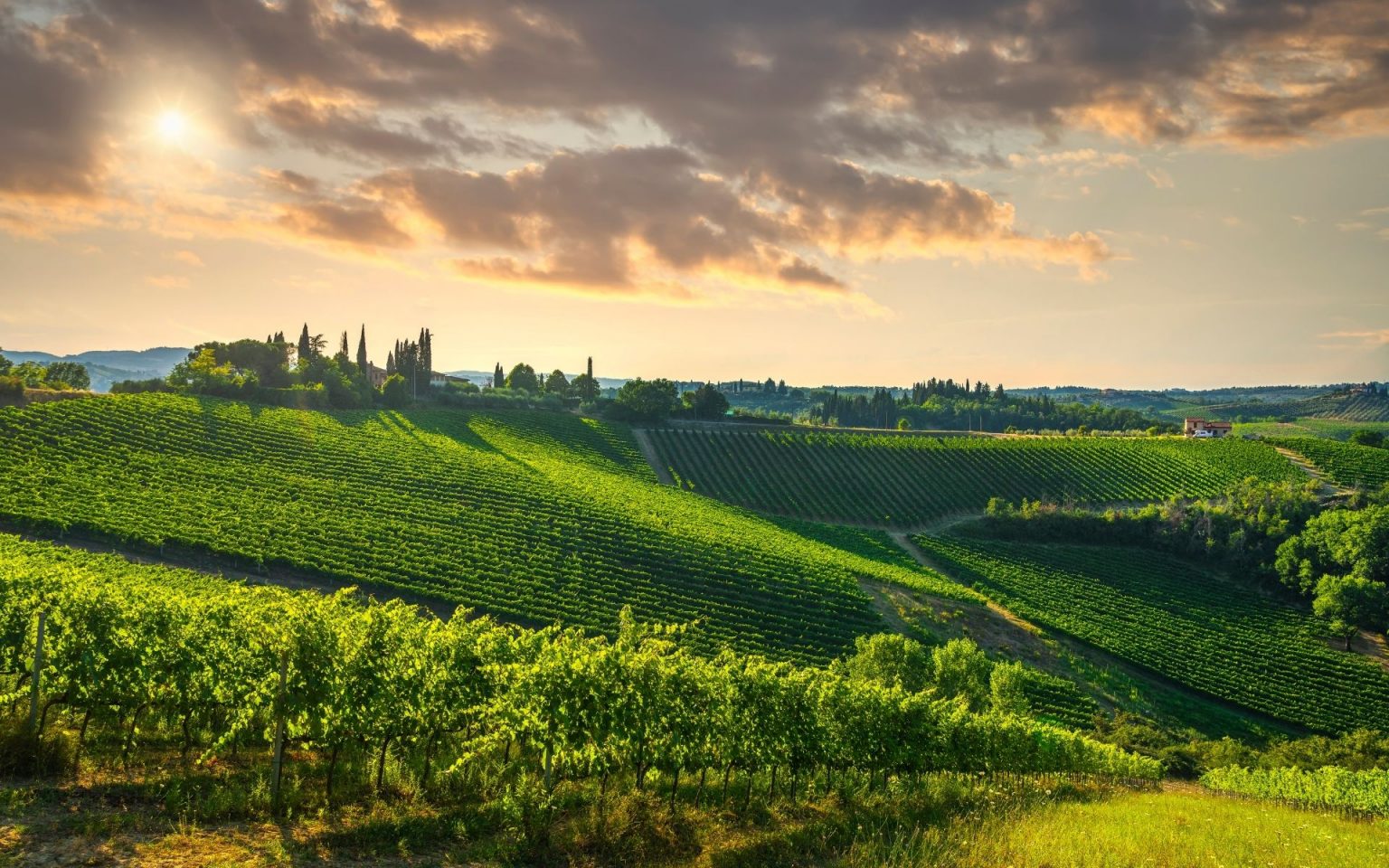 Chianti is a must see for anyone seeking for an authentic Tuscan experience.

Let’s discover together what to see in this fascinating corner of Tuscany!

Considered by many the entryway to Chianti due to its strategic positioning between Florence and Siena, Greve in Chianti is a picturesque town surrounded by vineyards and olive trees, which finds its heart in the ancient Piazza Matteotti (Matteotti square). Surrounded by palaces, arcades and loggias, the square is characterised by its unique funnel shape and is animated by many souvenir shops, wine shops, and restaurants which serve local specialties.

The town is rich with chapels and parish churches of notable interest, of which we recommend the Chiesa di Santa Croce, where many esteemed artworks are kept. Not far from the centre, on top of a small hill, stands the fortified village of Montefioralle, a fraction of Greve in Chianti. It has been included in the list if most beautiful villages in Italy and is a precious medieval experience.

Situated on the hill that divides Arbia and Pesa, Radda in Chianti is the smallest out of all the Chianti municipalities. It has ancient origins, as the finds uncovered in the area of Poggio la Croce confirm, dating back the to bronze age. The town maintains its original medieval charm, being once surrounded by antique city walls of which a few towers and small sections remain.

Must see are: Palazzo del Podestà, which dates back to the XV century; Propositura di San Nicolò, with its beautiful neogothic façade; and the Ghiacciaia Granducale, erected at the end of the XIX century and designated to the storage of ice.

Not to be missed is the hamlet of Volpaia, a splendid, fortified village of medieval origin embellished by a wonderful setting of vineyards.

Another must-see is Gaiole in Chianti, a town that retains its typical medieval urban structure. Located halfway between Chianti and Valdarno, it has always played an important role as a “market town” for nearby villages. The Gaiole territory is distinguished by the presence of ancient parish churches, among which the following are worthy of note: the Pieve di San Polo in Rosso in Poggio San Polo, whose construction dates back to the 12th century; and the parish church of Santa Maria a Spaltenna, dating back to the early 10th century, known for the Legend of the Crucifix.

From the town one can set out to discover suggestive castles scattered along the Strada dei Castelli del Chianti, amongst which the imposing Lombard Castle Castello di Brolio, and the Castello di Meleto, a typical example of a fortified farm, stand out.

Located on the top of a hill overlooking vineyards, olive groves and woods, Castellina in Chianti is a particular medieval center whose origins date back to the Etruscan period. This is proven by numerous finds uncovered in the surrounding area. Of particular note is the necropolis of Poggino near the Fonterutoli hamlet and the imposing mound of Monte Calvario, dating back to the VII-VI century BC. In the XVth century Castellina was under Florentine dominion. The Rocca’s majestic tower, which offers a spectacular view of the surrounding landscape, and ancient walls with basement walkway, the current Via delle Volte, remain from that period.

Nestled in the hills between Florence and Siena, Barberino Val d’Elsa is a delightful medieval village still partially surrounded by the ancient, fortified walls. These are embellished by two gates, the Florentine one to the north and the Sienese one to the south. Among its narrow streets one can breathe a suggestive atmosphere which will take you back in time.

In the Barberino area one can admire several interesting buildings such as: the Palazzo del Cardinale (Cardinal Palace), where the emblem of the Barberini family is exhibited; the Palazzo Pretorio (Pretorio Palace), decorated with the coats of arms of the podestà; and the Spedale dei Pellegrini, built in the 14th century but recently restored. On the other hand, the religious buildings include: the Chiesa di San Bartolomeo (San Bartolomeo Church), where you can admire a fragment of a fresco from Giotto’s school; and the Pieve di Sant’Appiano, of very ancient origins.

Between the Val di Pesa and the Val d’Elsa is Tavarnelle Val di Pesa, which presents a unique landscape surrounded by vast expanses of olive groves and vineyards, ideal for pleasant walks, horseback or bike rides. Inside the village and just outside the city are a large number of churches and parishes of great artistic value which are worth a visit on their own. Among the streets of the town center is the thirteenth-century Chiesa di Santa Lucia al Borghetto (Santa Lucia al Borghetto Church), inside which you can admire various works of art. Outside the village you can meet: the Pieve di San Pietro in Bossolo, one of the most classic examples of Romanesque in the Florentine countryside; and the Chiesa di Santa Maria del Carmine (Santa Maria del Carmine Church), dating back to the XVth century.

Not far from Tavarnelle, the village of San Donato in Poggio, which has preserved its medieval aspect, deserves a visit.

On the southern borders of the Chianti Classico is Castelnuovo Berardenga, a fortified village of which only a part of the old walls remain. The territory is rich in eighteenth-nineteenth-century villas, among which Villa Chigi Saracini stands out, a unique architectural jewel of its kind. For lovers of art and culture there are two interesting museum structures: the Museo del Paesaggio (Landscape Museum), which aims to make people reflect on the transformations of the world; and the Parco Sculture del Chianti (Chianti Sculpture Park), a permanent exhibition of contemporary installations and sculptures.

Don’t miss the small village of San Gusmè, set in a splendid landscape of vineyards. Not far from the town is the hamlet of Monteaperti, on whose hill the historic battle between Siena and Florence was fought in 1260, also mentioned by Dante in the Divina Commedia.

Nestled in the heart of the Val d’Elsa, Poggibonsi is a characteristic medieval village that fascinates visitors with its historical remains and its beautiful landscapes. Among the religious buildings we highlight: the monumental complex of San Lucchese, one of the very few examples of Gothic architecture in Italy, which boasts an exceptional collection of works of art; and the Chiesa di San Lorenzo (San Lorenzo Church), with works of great value. In terms of examples of military architecture: the Fortezza di Poggio Imperiale (Poggio Imperiale Fortress), built in the sixteenth century by the will of Lorenzo the Magnificent, a project never fully realized; and the Castello della Magione, which preserves original traces of its medieval architecture.

Also of considerable interest is the Archeodromo (Archeodrome), a full-scale reproduction of a small 9th and 10th century village.

On a hill overlooking the Greve and Pesa valleys stands San Casciano in Val di Pesa, a village rich in history and tradition known for the production of wine, extra virgin olive oil and many other agricultural products. The town and the surrounding hills have several religious buildings that are worth a visit: the Collegiata di San Cassiano (San Cassiano Collegiate Church), in neoclassical style, which houses valuable works of art; the Chiesa di Santa Maria al Prato (Santa Maria al Prato Church), among which noteworthy works is a Crucifix by Simone Martini; the Chiesa di Santa Maria del Gesù (Santa Maria del Gesù Church), which houses the Giuliano Ghelli Museum and important paintings; and the Pieve di San Pancrazio, an extraordinary example of Lombard-inspired Romanesque architecture.

In San Casciano, at the locality of La Collina, also stands the tomba etrusca dell’Arciere (Etruscan tomb of the Archer), dating back to the seventh century BC.

Located on the border of the Chianti Classico area, Impruneta is not strictly speaking part of the Chianti area but is undoubtedly worth a stop. It stands in an area dotted with woods, vines and olive groves, but what has given it and gives it notoriety is the production of the so-called Impruneta terracotta, terracotta whose tradition dates back to the Middle Ages. The town is rich in monuments, including the imposing basilica, dating back to the 11th century, dedicated to Santa Maria with the adjoining museo del Tesoro (museum of the Treasury), which houses works by important artists such as Michelozzo and Luca della Robbia, as well as to a miraculous icon of the Madonna.

As for the cuisine, it is said that the peposo, a typical Tuscan dish made of beef, red wine and black pepper, was invented by the kilns of Impruneta.

Are you ready to discover one of the most beautiful territories in the world?

Chianti awaits you with its charming villages!