The Palio of Siena

Among the countless events that periodically take place in Tuscany, one of the most beautiful and fascinating is without a shadow of a doubt the Palio di Siena, the historic medieval competition that attracts crowds of onlookers from all over the world thanks to the extraordinary spectacle it offers. But the competition is not organized for tourism purposes only, because it represents the life of the Sienese people over time and in its various aspects.

For those unfamiliar with it, the Palio is a passionate horse race in which the city districts compete. Siena is divided into 17 districts (Aquila, Bruco, Chiocciola, Civetta, Drago, Giraffa, Istrice, Leocorno, Lupa, Nicchio, Oca, Onda, Pantera, Selva, Tartuca, Torre and Valdimontone) but only 10 participate in each Palio: the 7 that did not run the previous year plus 3 drawn by lot. The race, traditionally called “carriera“, consists of three laps around the wonderful Piazza del Campo, for a total of about 1000 meters, also overcoming dangerous points such as the historic curves of the Casato and San Martino, where collisions and falls frequently occur. The horse that crosses the finish line first wins, even if “shaken”, ie without a jockey. The winning district receives the Drappellone as a prize, called by the Sienese “cencio”, that is, a painting on fabric designed each time by a different artist. 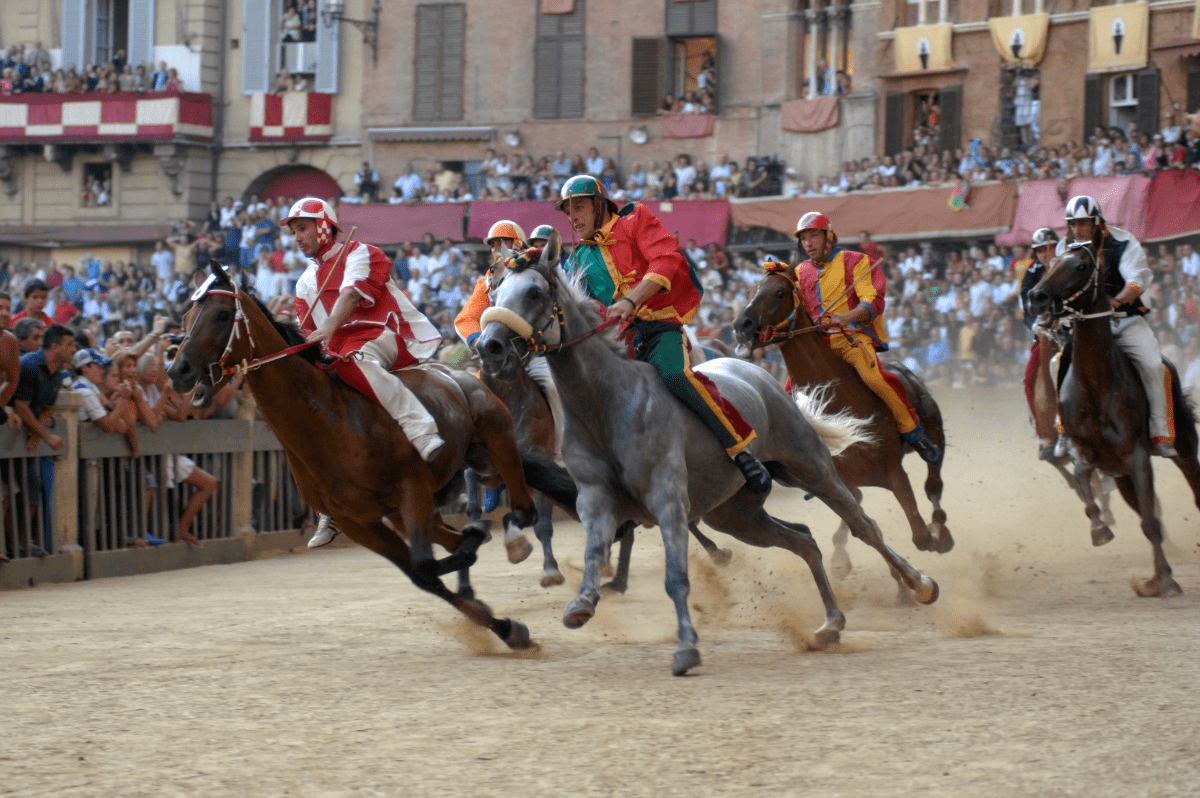 There is no certain starting date for the Palio and its history is intertwined with that of the city. Since the thirteenth century there is evidence of a horse race in Siena but it is only in the nineteenth century that it takes its current appearance. The Palio is traditionally held twice a year: on 2 July the Palio di Provenzano is held in honor of the Madonna di Provenzano; and on August 16 there is the Palio dell’Assunta dedicated to the Madonna dell’Assunta. Even if, on the occasion of absolutely exceptional circumstances or events, the community may decide to carry out an extraordinary Palio. Among the events that mark the approach of the race, one of the most important is the so-called “tratta“, with which each district is assigned a horse by drawing lots. It is a time of great tension, because a good horse can be decisive.

Considered as a real popular festival, the competition, which involves the entire Sienese population, is preceded by a historical procession in which almost seven hundred figures dressed in period costumes take part. The historical walk, as it is defined in Siena, is a commemorative representation of the institutions, customs and grandeur of the ancient Sienese Republic. The procession ends the tour in Piazza del Campo after having paraded through the streets and squares of the city.

Attending the Palio di Siena, in addition to being a truly exciting experience, is also the right opportunity to visit and discover the beauties of this enchanting city.