Vinci, the city of Leonardo

Located just over 30 kilometers from our villa, Vinci is a charming village surrounded by olive groves and vineyards that offers extraordinary and incomparable landscapes. It owes its fame to Leonardo, who was born here, in the locality known as Anchiano, on April 15, 1452 and gained the first inspirations for his studies and paintings. The most interesting places in the city are linked to his genius.

The heart of the historic center is the Castello dei Conti Guidi, a majestic medieval building that has watched over the town since the 12th century. The original nucleus of the complex, known as the “ship’s castle” due to its particular shape reminiscent of that of a sailing boat, is still preserved today. Inside there is a valuable ceramic Madonna with Child by Giovanni della Robbia but above all it houses one of the seats of the Leonardiano Museum. On the ground floor there are sections dedicated to civil engineering, war machines, flight, mechanisms and instruments while on the first floor there is the room dedicated to devices for movement in water and for river navigation, the room immersive with the video installation “Ebbe nome Lionardo” and the multimedia exhibition “Anatomy of drawings”. 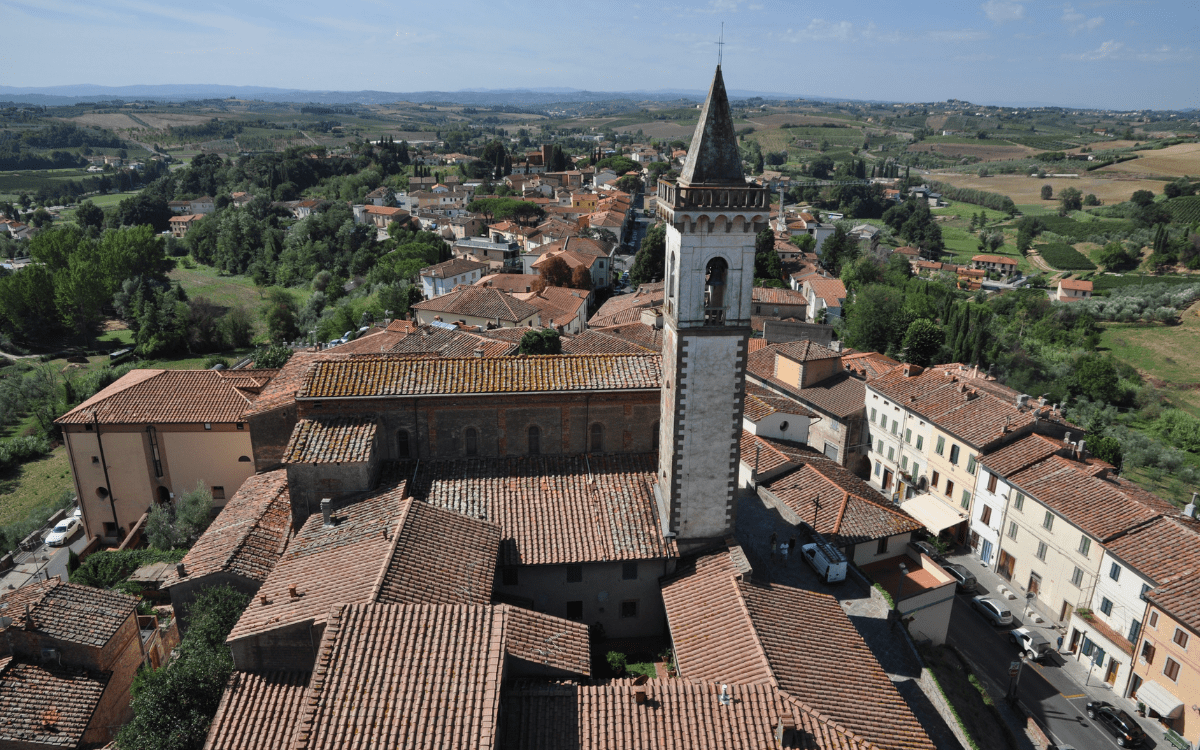 Inside the walls of the ancient castle there are also: the Leonardian Library, which collects over sixteen thousand works by and on Leonardo; and the Church of Santa Croce, where you can admire the baptismal font in which the artist-genius of the Renaissance was baptized. In the square behind the entrance to the castle is the large sculpture “The Man of Vinci“, a masterpiece by the artist Mario Ceroli who pays homage to the Vitruvian Man. A few meters away is the suggestive Piazza dei Guidi, reconfigured in 2006 by the contemporary artist Mimmo Paladino. Here is the entrance to the Palazzina Uzielli, which houses another exhibition site of the Leonardian Museum. The building is named after Gustavo Uzielli, one of Leonardo’s greatest scholars. It contains the sections dedicated to construction machinery, textile manufacturing technology, mechanical watches and anatomy.

In the historic residence of Villa il Ferrale, halfway between Vinci and the suburb of Anchiano, a section dedicated to painting is set up, which presents high-resolution and life-size reproductions of all Leonardo’s paintings: from the famous Mona Lisa to the monumental Last Supper. The Leonardo Museum itinerary then ends with Leonardo’s birthplace in Anchiano, which can also be reached on foot from the village along the ancient path of 3 kilometers called “Strada Verde”, immersed in the magnificent Tuscan countryside. Here a life-size hologram tells the most intimate and personal side of the great master while the multimedia application “Leonardo Touch” invites you to discover his pictorial and graphic works.

Among the things to see outside the village of Vinci are: the parish Church of San Giovanni Battista in Sant’Ansano in Greti, dating back to the 10th century, where some valuable works of art are kept; the Pieve di San Pietro in Sant’Amato, an extraordinary example of Romanesque architecture in Tuscany; and the Church of Santa Maria a Faltognano, preceded by a natural panoramic terrace shaded by an imposing centuries-old holm oak.