What to see in Asciano

In the heart of the Crete Senesi, surrounded by a continuous succession of biancane and calanchi, rises the small village of Asciano, capable of seducing and captivating with its atmosphere of the past. The territory has been inhabited since ancient times, as evidenced by the numerous finds found in the area, in particular at the Etruscan necropolis of Poggio Pinci (5th century BC) and the Tumulo del Molinello (used from the 7th to the 1st century BC). A fragment of a mosaic floor remains from the Roman period.

Asciano boasts an evocative historic center, of clearly medieval origins, enclosed by well-preserved fourteenth-century walls. Walking through its narrow streets you can admire numerous architectural testimonies of great value. Among these we cannot fail to mention the Basilica of Sant’Agata, the main place of worship in the village as well as one of the churches of greatest artistic importance in the Sienese territory. Already a parish church in the 11th century, today’s construction can be traced back to the Romanesque-Gothic transition period. Over time it has undergone several restoration interventions, until it assumed its current appearance in 1955. Inside it preserves valuable works of art, including a Madonna with Child and archangels attributed to Luca Signorelli and a tondo by Sodoma depicting the Deposition of Christ.

Remaining in the religious field, near Chiusure (a few kilometers from the village) is the stupendous Abbey of Monte Oliveto Maggiore, a treasure chest not only of faith but also of art. Immersed in unspoiled nature, it was one of the most influential monastic centers in Italy between the 15th and 16th centuries. In the large cloister you can appreciate a magnificent cycle of frescoes, depicting the life of St. Benedict, painted first by Luca Signorelli (in 1495) and then by Sodoma (in 1505). In the monastic complex there is also a small museum that collects the artistic testimonies of the monastery and the churches of the Olivetan diocese. 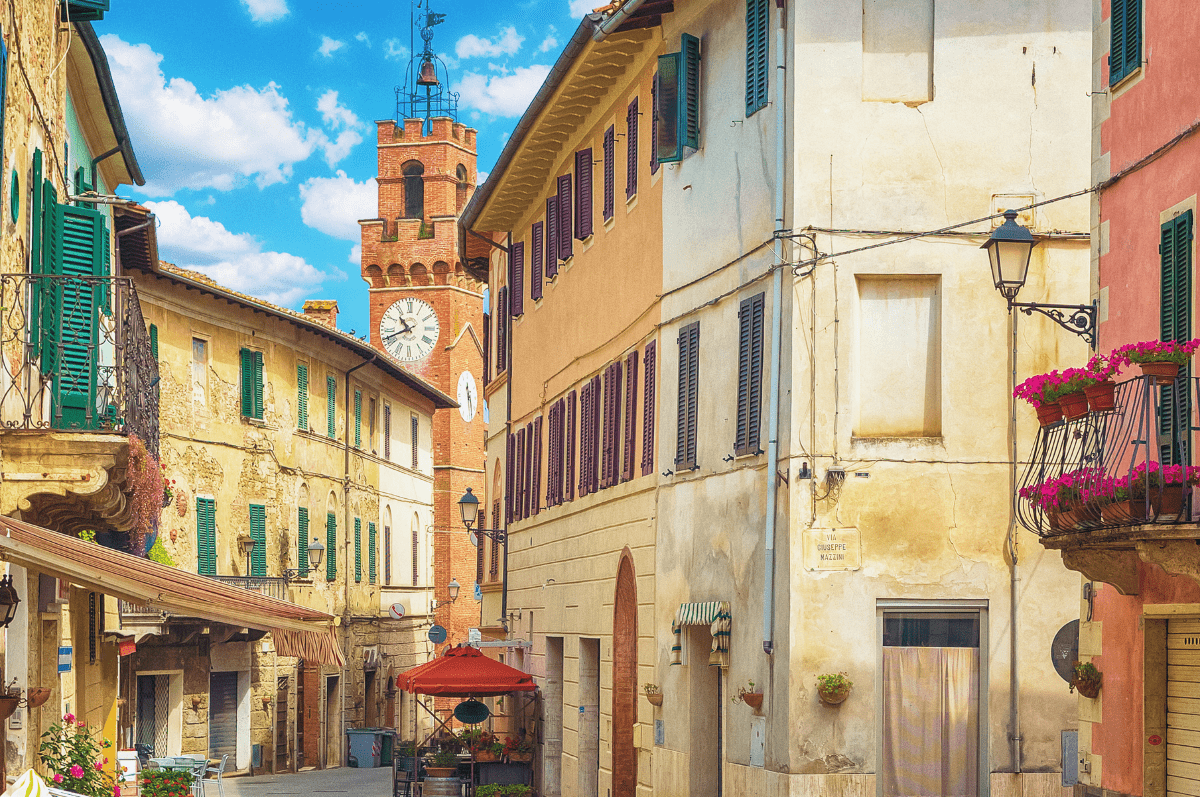 Among the other places of worship, the following are worthy of note: the Church of Sant’Agostino, which is presented in the aspect received between the end of the 16th and the beginning of the 17th century; and the Church of San Francesco, built in the 13th century, which houses a beautiful polychrome ceramic altarpiece from the Della Robbia workshop and a marble stoup made by Antonio Ghini.

There are also museums. The Archaeological and Sacred Art Civic Museum, set up inside the thirteenth-century Palazzo Corboli, has been included by the Daily Telegraph among the 15 most beautiful small museums in Italy. The exhibition itinerary is divided into three sections: the archaeological one, consisting of finds from the Etruscan and Roman periods from the area; that of sacred art, which collects works by the greatest Sienese artists from the thirteenth to the seventeenth century; and one dedicated to the flourishing local production of ceramics. Instead, the Cassioli Museum, housed in a building from the early twentieth century, is entirely dedicated to Sienese painting of the nineteenth century and is divided into two sections: the first exhibits sketches and works by those who were the protagonists of the Academy of Fine Arts in Siena. ; the second retraces the artistic path of Amos Cassioli and his son Giuseppe.

Finally, even if it can only be admired from the outside, the medieval Castle of Gallico is still worth a visit, which stands on a plateau from which it is possible to enjoy a splendid view that reaches as far as Siena. The castle, built in the second half of the 14th century, is a beautiful example of a fortified farm.