What to see in Pisa

Located just over 70 kilometers from our villa, Pisa is a small and charming city that everyone should visit at least once in their life. It is famous all over the world for the Leaning Tower but this majestic bell tower is just one of the countless artistic and historical treasures that the beautiful Tuscan city offers.

The visit of Pisa can only start from the spectacular Piazza dei Miracoli, which contains a cultural heritage of exceptional universal value. In 1987, Unesco included it in the World Heritage List. The origin of the name is to be attributed to the poet Gabriele D’Annunzio, who in his novel “Maybe that yes, maybe that no” renamed it “meadow of miracles”. And it is precisely since then that it has been known as Piazza dei Miracoli. It houses four wonders of medieval architecture: the Cathedral of Santa Maria Assunta, a Pisan Romanesque masterpiece that preserves extraordinary works of art; the famous Leaning Tower, from which it is possible to admire a view that is nothing short of spectacular; the Baptistery dedicated to San Giovanni Battista, which stands out for its considerable size; and the Campo Santo, one of the oldest medieval Christian buildings intended for the cult of the dead. Small curiosity: in addition to the tower in Piazza dei Miracoli, in Pisa there are two other inclined towers, that of the Church of San Nicola and that of San Michele degli Scalzi. 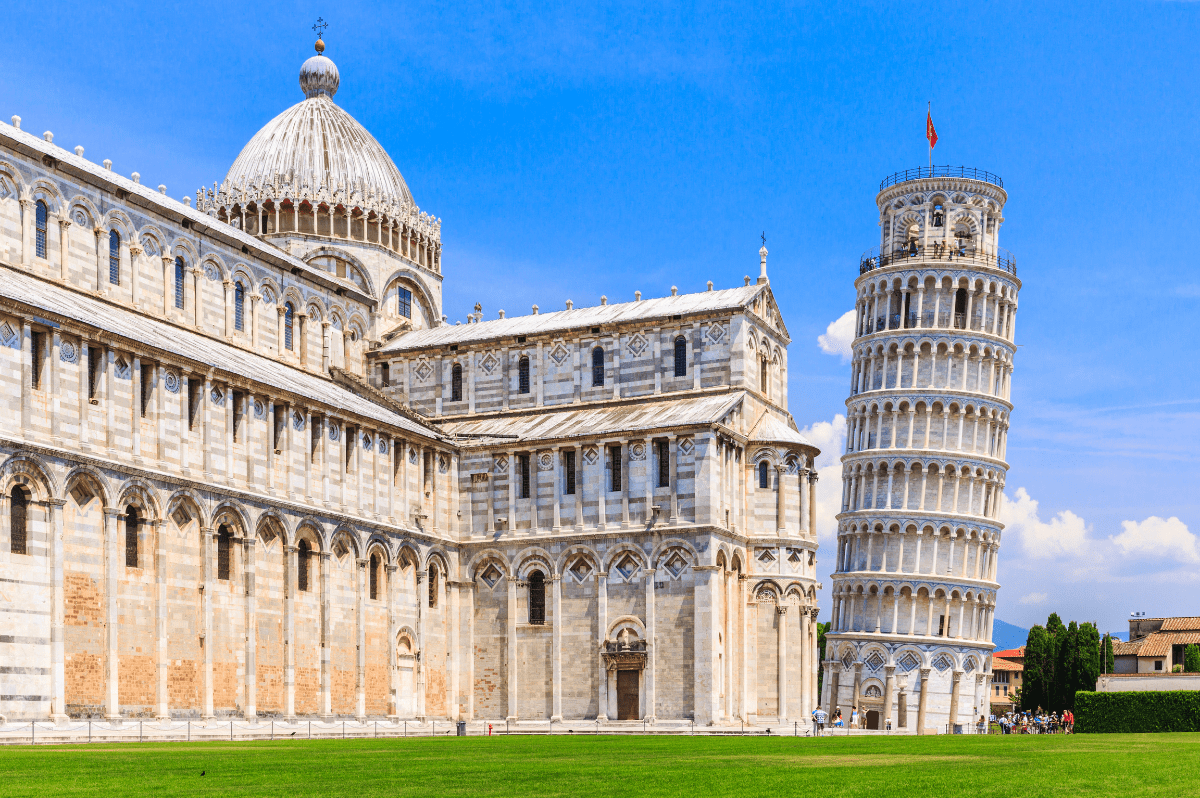 Another square to visit is the elegant Piazza dei Cavalieri, a must for those who want to deepen the history of the city. Its current appearance is the result of an important urban redevelopment work carried out largely on a project by Giorgio Vasari starting from 1562. Among the different buildings that overlook the square, the following stand out: the Palazzo della Carovana, now home to the prestigious Scuola Normale Superiore founded by Napoleon; the Church of Santo Stefano dei Cavalieri, renowned for its precious carved wooden ceiling; and the Palazzo dell’Orologio, where Count Ugolino was held prisoner and died of hunger with his family. A few steps from Piazza dei Cavalieri is Borgo Stretto, one of the main streets of the city where you can stroll and shop under the medieval arcades. Along the way there are various historic buildings, including: the Casino dei Nobili, dating back to the 18th century; and the Church of San Michele in Borgo, which preserves frescoes and paintings dating back to between the 13th and 18th centuries.

For those who appreciate museums, the National Museum of Palazzo Reale is certainly worth a visit, which collects furnishings and works that belonged to the families who lived in the palace, including masterpieces by the likes of Rosso Fiorentino, Raphael and Giuseppe Maria Crespi. The building, commissioned by Francesco I de ‘Medici, was built between 1583 and 1587 on a project by the architect Bernardo Buontalenti. Palazzo Reale is just one of the many attractions found on the Lungarni, the streets that run alongside the Arno river. The most famous stretch is the Lungarno Mediceo, overlooked by: the National Museum of San Matteo, which houses an interesting collection of sculptures and paintings; and several historic buildings such as the Palazzo dei Medici, Palazzo Toscanelli and the Church of San Matteo in Soarta. On the Lungarno Gambacorti instead there is a small architectural jewel, the Church of Santa Maria della Spina, which represents a splendid example of Pisan Gothic style.

Another attraction not to be missed in Pisa is the colorful mural “Tuttomondo” created in 1989 on the external wall of the rectory of the Church of Sant’Antonio Abate by the American artist Keith Haring, master and precursor of street art. The work portrays 30 men wedged together as in a puzzle. Finally, those who love nature, and botany in particular, cannot miss the Botanical Garden, founded in 1543 by the famous Imola physician and botanist Luca Ghini. It is divided into seven sectors and houses a rich collection of plants from all over the world. Inside the garden there is also a museum, which houses various works of historical and artistic interest as well as scientific.