What to see in Poggibonsi

Located just over 15 kilometers from our villa, Poggibonsi is a pleasant medieval town that fascinates visitors with its beautiful landscapes but also with its countless historical testimonies. It rises in the heart of the Alta Val d’Elsa, near the gentle hills of Chianti, and has very ancient origins. It corresponds to the ancient urban area of ​​Borgo Marturi, which in the 12th century became an irreplaceable center of the Via Francigena, the historic religious pilgrimage route that led from northern Europe to Rome.

It boasts a very characteristic historic center which, with its pastel-colored houses, gravitates around the central Piazza Cavour, where two of the main city buildings are located. The first, the Palazzo Pretorio, was built between the end of the 13th and the beginning of the 14th century, and was the seat of the civil power of Poggibonsi until the construction of today’s Palazzo Comunale in 1862. Since 1997 it has housed the Museum of Paleontology ” Francesco Costantino Marmocchi “, which is divided into sections Paleontology, Evolution of Man and Local History. The second building is the Collegiate Church of Santa Maria Assunta, whose current appearance in neoclassical forms dates back to the second half of the nineteenth century. Inside it preserves a large “Resurrection” by Francesco Botticini and paintings by Aurelio Lomi, Giuseppe Collignon and Alessandro Franchi. 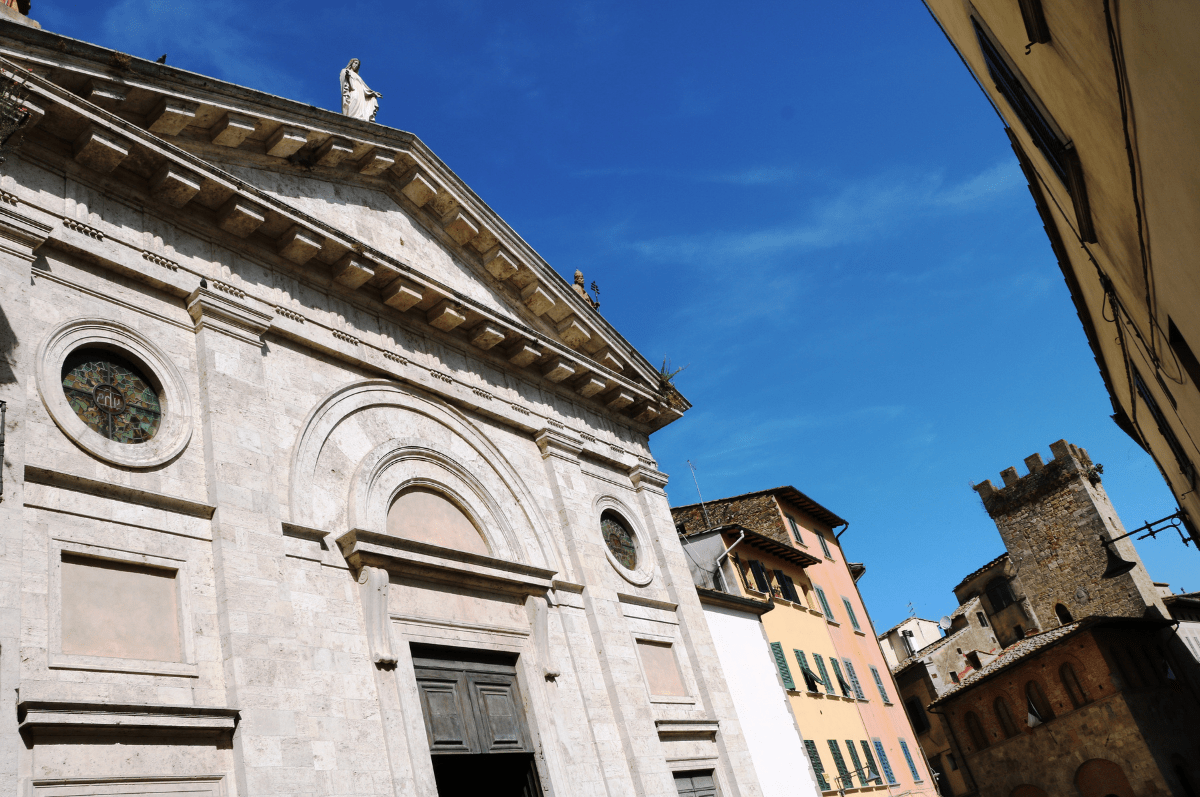 In Poggibonsi the religious buildings are numerous. In fact, in addition to the Collegiate Church, there are really many places of worship compared to the number of inhabitants. Among these we cannot fail to mention the Church of San Lorenzo, built by the Augustinian order in the Gothic-Romanesque style. It houses works of great value: a San Nicola by Neri di Bicci; a fourteenth-century and much venerated crucifix by Giovanni D’Agostino; and a beautiful Madonna delle Grazie coming from the suppressed Oratorio del Piano. In this church in 1495 a historic meeting took place between Charles VII and Girolamo Savonarola. Other religious buildings include: the Sanctuary of Romituzzo, dating back to the 14th century, in which anatomical votive offerings and painted tablets are preserved; and the San Lucchese Convent, where you can admire a precious collection of works of art.

Instead, as examples of military architecture stand out: the Medici Fortress, called “di Poggio Imperiale”, built at the beginning of the sixteenth century by the will of Lorenzo the Magnificent but whose project was never completed; and the Castello della Magione, a small medieval monumental complex that belonged to the Knights Templar. The aforementioned Medici Fortress is part of the Archaeological Park, born in 2003 to tell the long and fascinating past of the Poggio Imperiale hill. In addition to the walkway, from which it is possible to enjoy a splendid view of the surrounding hills, the park includes: the Documentation Center, which traces the history of the site through explanatory panels, finds and reproductions; and the Archeodrome, the first Italian open-air museum on the Early Middle Ages, which reproduces the village of huts living between the 9th and 10th centuries.

Finally, the Fonte delle Fate is also worth a visit, the only impressive architectural relic of the overlying and destroyed Poggio Bonizio. Also known as Fonte di Vallepiatta, it was built in the 13th century and then covered during the construction of the Medici Fortress. Brought back to light in 1803 and subsequently brought back to its original state, it is traditionally attributed to Balugano da Crema. It houses the contemporary work of art “I Dormienti” by the artist Mimmo Paladino, considered one of the most important representatives of the Italian Transavantgarde.