What to see in San Casciano in Val di Pesa

In the heart of the Florentine Chianti is San Casciano in Val di Pesa, a picturesque medieval village where time seems to have stopped which is just over 10 kilometers from our villa. This pretty town perched on a hill between vineyards and olive groves is renowned for the production of wine, extra virgin olive oil and agricultural products in general. The medieval center still bears traces of the ancient walls that were built in the second half of the fourteenth century. Of the four gates remains, albeit rebuilt, Porta del Prato.

The territory of San Casciano was already inhabited in Etruscan times, as evidenced by some finds found in the archaeological area of ​​Poggio la Croce and in the locality of La Collina, near the hamlet of Montefiridolfi, where you can admire the remains of the famous tomb of the Archer, dating back to the 7th century BC. Walking through the streets of the center, on the other hand, you come across several works of contemporary art, among which stand out: the deer by Mario Merz that can be seen on the walls, followed by a neon numerical progression, which is inspired by the famous mathematical formula of Fibonacci; and the monumental sculptures by Mauro Staccioli placed at the entrance to the town. 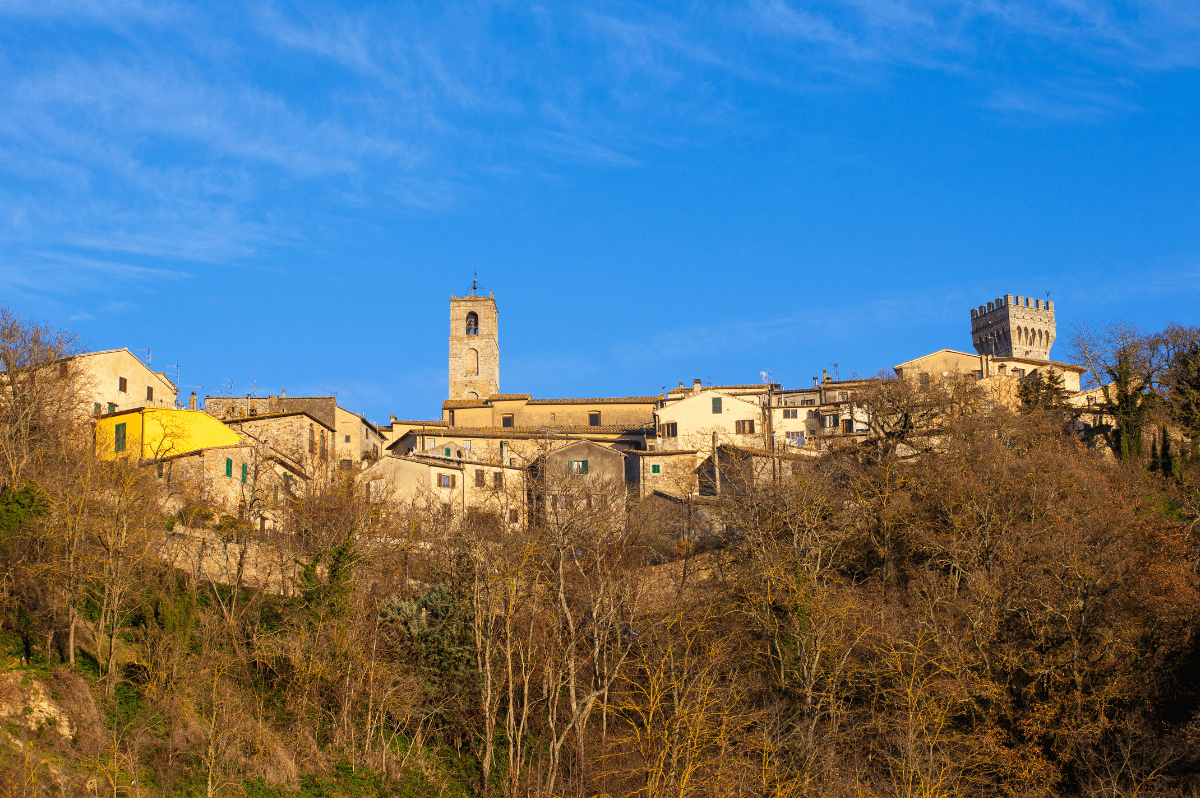 The village and the surrounding hills have several religious buildings of considerable interest not only for their artistic value but also because they are inserted in an extraordinary landscape context. The most important is undoubtedly the Collegiate Church of San Cassiano. Built in neoclassical style in the second half of the 18th century, it preserves valuable works of art such as the wooden crucifix attributed to Baccio da Montelupo and the fresco depicting the Glory of San Cassiano by Luigi Pistocchi. Also in the center is the Church of the Misericordia, also known as Santa Maria del Prato, an architectural jewel of fourteenth-century origin with a rich heritage of works by important Florentine and Sienese artists.

Outside the inhabited center, the following are worthy of note: the parish church of Santa Cecilia a Decimo, probably the oldest in the area; the Pieve di San Pancrazio, which represents an interesting example of Lombard-inspired Romanesque architecture; the Pieve di Santo Stefano a Campoli, which, although modified over the centuries, still shows its original Romanesque setting; and the Pieve di San Giovanni in Sugana, which houses some precious works of art in its naves.

Do not miss the Giuliano Ghelli Museum set up inside the Church of Santa Maria del Gesù or del Suffragio and in the adjoining rooms, obtained from the premises of the ancient convent of the Benedictine nuns. The museum is divided into three sections: sacred art, with works and objects ranging from the twelfth to the twentieth century from local churches; archeology, with the finds found in the territory of San Casciano and Val di Pesa; and contemporary art, which offers a selection of works created by Chianti artists by birth or adoption. Finally, the Torre del Chianti is also worth a visit, the ancient piezometric tower transformed into a cultural center, from which you can admire a splendid view of the Chianti hills.