What to see in Volterra

In the heart of the Tuscan countryside, about 40 kilometers from our villa, lies the ancient city of Volterra, the perfect destination for a day trip. Enclosed within the thirteenth-century walls, it has preserved its characteristic medieval appearance almost intact. It offers a large number of places to discover and has been known since the times of the Etruscans for the processing of alabaster, whose artifacts are one of the most typical products of Italian craftsmanship. Here the writer Stephenie Meyer has imagined the second chapter of the famous Twilight saga, which tells the love story between a girl and a vampire.

What to see in Volterra? The visit can only start from the Etruscan Porta dell’Arco, one of the oldest monuments in the city. Built between the 4th and 3rd centuries BC, it was later incorporated into the medieval walls. Although it has been modified several times over time, it still retains all its charm today. After passing the gate, walking on Via Porta all’Arco and then on Via dei Marchesi you reach the splendid Piazza dei Priori, the historic heart of Volterra, whose flourishing past is witnessed by the buildings that overlook it. Among these stands the Palazzo dei Priori, the oldest municipal building in Tuscany. The building, partially open to the public, is richly decorated with valuable frescoes. You can also climb to the top of the Bell Tower, from which you can enjoy a magnificent view. 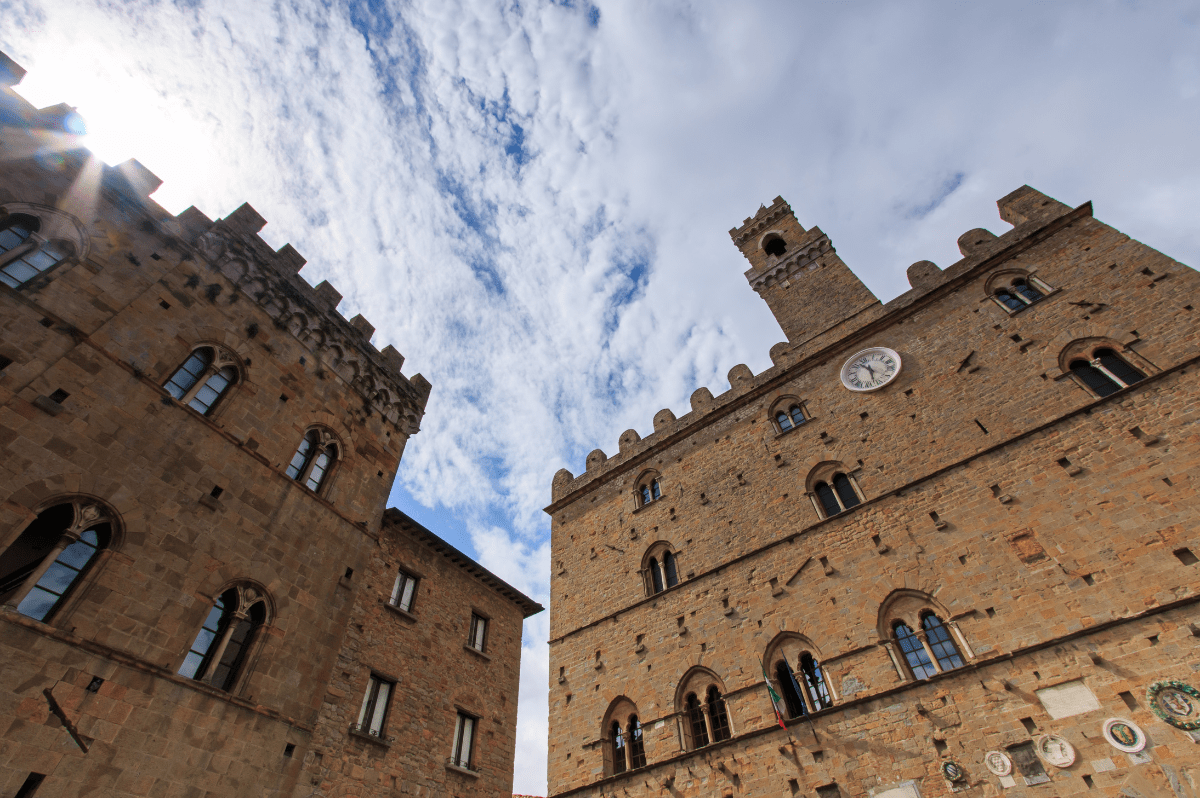 In the nearby Piazza San Giovanni you can admire the Cathedral of Santa Maria Assunta, also known as the Cathedral of Volterra. Built in the 12th century on a pre-existing church, it was enlarged in the second half of the 13th century. Inside it houses treasures of extraordinary beauty made by renowned artists. Among which we highlight: the ancient sculptural group called “of the Deposition”, made up of five wooden statues; and the elegant ciborium by Mino da Fiesole. In front of the cathedral is the Baptistery of San Giovanni, with its facade covered with white and green marble and the beautiful Romanesque portal. The interior is small but houses a valuable octagonal baptismal font, built in the sixteenth century by Andrea Contucci, known as Sansovino.

Archeology enthusiasts cannot miss the ruins of the Roman Theater in Vallebuona, one of the most beautiful and best preserved in Italy. Built at the end of the 1st century BC, it was abandoned in the 3rd century and a large thermal plant was built near the scenic building, of which some mosaics have been preserved. In this evocative setting, during the summer, the International Festival takes place, an event that ranges from prose to dance, from music to opera. The Etruscan Acropolis is also worth a visit, with the remains of a sanctuary complex that has had a long continuity of life, from the 7th century BC. to the third century AD Next to the excavations of the acropolis is the large Roman Cistern, dating back to the 1st century AD. and used in 1965 by the director Luchino Visconti to shoot some scenes of “Vaghe Stelle dell’Orsa”.

Those who love to visit museums, on the other hand, are spoiled for choice. The most important is undoubtedly the Mario Guarnacci Etruscan Museum, where finds ranging from prehistory to the Hellenistic period are collected. Among the exhibited pieces, the famous “Ombra della Sera” stands out, a bronze statue of the Hellenistic age with a characteristic elongated shape. Also of great interest is the Pinacoteca and Civic Museum, where works by artists of the caliber of Rosso Fiorentino and Domenico Ghirlandaio are preserved. Other museums include: the Alabaster Ecomuseum, which illustrates the history of alabaster processing from the Etruscan era to the present day; the Diocesan Museum of Sacred Art, set up inside the Church of Sant’Agostino, which presents works from the churches of the diocesan territory; and the Torture Museum, with an exhibition of around 100 tools designed to torture and kill.